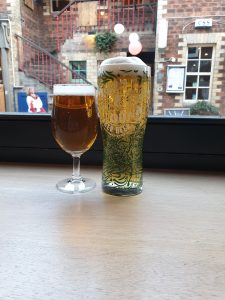 When you are near Ashton Lane, pop into Innis & Gunn. They have a great choice of craft beers and pretty tasty food.

To get a taster of the beers on offer, ask and they’ll give you a selection of 5 very different beers.

I could quite easily enjoy a pint of the Original chilling on Ashton Lane.

Now onto the food – The Scotch Egg is simply delish!

Stornoway Black Pudding is my favourite and works perfectly with the sausage & egg. The light crisp crumb finishes it off nicely.

The Scotch ale brown sauce works a treat with it.

One of the best Scotch eggs I’ve tasted and a great snack to have with my Original Craft Beer.

So pop in to Innis & Gunn – you won’t be disappointed – great food, great drink, great venue!