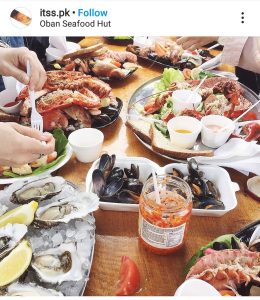 Scotland is sometimes not known for quality produce but in reality, it can boast some of the finest food and drink in the world.

Let’s start off with seafood!

Scotland supplies the finest scallops, langoustines, lobster and oysters not to mention smoked salmon and trout.

The West Coast is known for its shellfish and North East for its pelagic & demersal fish (Mackerel & Halibut).

After Whisky, Seafood is Scotland’s second largest export, sold to over 100 countries and Scottish salmon is both Scotland’s and the UK’s top food export (Scotland Food and Drink).

Scotland accounts for over two thirds of the UK’s fishing industry so go try some meaty scallops, flaky salmon or Arbroath Smokies – you won’t regret it.

Over two thirds of the world’s langoustines are sourced in Scotland, Scottish Salmon was the first foreign product to gain France’s prestigious ‘Label Rouge’ quality mark and Scottish lobsters are on the menu in over 20 Michelin-starred restaurants in Tokyo alone (scotland.org).

There is certainly a demand for our seafood not only here but around the world.

When you get the chance, check out this list where you can grab some of the finest seafood around Scotland.